skip to main | skip to sidebar

WAORANI The Saga of Ecuador's Secret People: A Historical Perspective

This article is such a clear presentation of how modern civilization is destroying traditional cultures and teaching them to live in the ways of the corrupt world system which is destroying them.
GOD, LET YOUR KINGDOM COME AND RULE IN THE HEARTS OF THESE PEOPLE.

Not just the Waorani but all the weak and defenseless people being abused by the big, powerful, greedy societies; so-called Western "civilized" society. Help your people to rise up, seize the opportunities to be the voice for these that have no voice, to show them the ways of the kingdom and to true life in Christ.

Posted by Stephen at 4:20 PM No comments:

The prudent sees the evil and hides himself,

Proverbs 22:3 (New American Standard Bible)
The prudent sees the evil and hides himself,
But the naive go on, and are punished for it.

Troubles are a part of life. Don't be lulled to complacency by apparent peace. Please prepare.
This is a very interesting allegory:
The Storm. 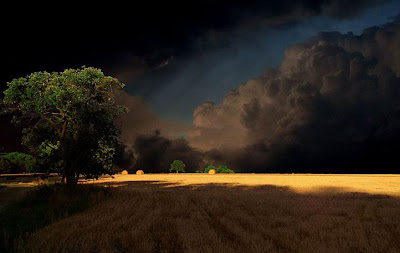 Picture source
Posted by Stephen at 7:54 PM No comments:

Honor and respect in the Xavante people

I enjoy learning and reading about different indigenous tribes.
This is an excerpt from a paper I found on the SIL website, concerning respect and honor in relationships with in-laws in the Xavante people in Brazil, a very popular subject, I'm sure, for all married people! ;) For me it is very thought provoking concerning treating everyone with respect and honor.

1.3 In-laws
Perhaps the most central and crucial relationship in Xavante society is that of son-in-law–parents-in-law, especially that of son-in-law–father-in-law. When a young man marries, he moves into his in-laws' house. At this point he must accept his father-in-law as head of the household, and treat him with utmost respect. He is obliged to work for him in his fields and in general is subservient to him. During this potentially volatile transitional phase, the son-in-law avoids making eye contact with or speaking to either of his parents-in-law unless absolutely necessary, and usually communicates by using his wife or, less commonly, someone else as a liaison. At those times when he must speak to them, he employs the respect forms. Curiously, the father-in-law rarely speaks directly to his son-in-law as well, despite the fact that he is in a position of authority over him. Again, when direct communication is necessary, he also utilizes the respect forms. Perhaps this serves to emphasize the extreme volatility of the relationship. Avoiding direct address at all costs enables those involved to avoid direct confrontation and the possibility of the severing of the relationship. As the relationship is stabilized and the son-in-law matures, the speech taboo is utilized less and less as a form of avoidance behavior. Nevertheless, the honorific grammatical forms continue to be used by the in-laws to call attention to and encode their relationship. For girls, the above phenomenon involving men which so strongly characterizes Xavante culture is rarely exhibited. A young married girl has little direct contact with her father-in-law, and although she may frequently visit her mother-in-law, the relationship is usually anything but tense. Nevertheless, a mother or father-in-law will use the honorific forms to address a son's wife.
Posted by Stephen at 7:47 PM No comments:

I was encouraged by this article to stay focused, though it's been slow, on my process to get setup on my land:

I'm looking at planting some trees to start the 5 year clock to get the ag exemption on my land. I'm thinking about oak to be able to harvest for firewood.
Posted by Stephen at 11:05 PM No comments: